Hopewell Valley Regional School District, as it functions today, has been a regionalized operation since 1965 when voters of Hopewell Township, Hopewell Borough and Pennington Borough approved a plan to consolidate their schools. But the first consolidation of local schools actually occurred in 1894 when the 14 separate districts, operating one-room schoolhouses throughout the valley, agreed to merge and be governed by a single school board.

Hopewell Valley’s first high school was started in 1907 in a two-room addition to the Lincoln School in Hopewell Borough. Five years later, the first building constructed to serve as a high school was opened. Later serving as Borough Hall, the building cost $20,000 to build.

The building was used until 1929 when growing enrollment forced officials to look for something larger. They ended up on a five-acre lot of the Baldwin Tract on South Main Street in Pennington, where for $158,000 they built Central High School, a stately, modified Colonial designed by J. Osborne Hunt. The Pennington location miffed residents in Hopewell Borough who briefly withdrew from the district and sent their older students to Princeton High School.

Thirty years later, when a growing high school enrollment again forced officials to look for larger quarters, they ended up at a tract along Pennington-Titusville Road, near Route 31. The new Central High School was built in 1958 at a cost of $1.7 million.

Until 1958, 7th and 8th grades were housed in the elementary schools of Hopewell Valley. That year, the district established a K-6 elementary school, a 7-8 junior school, and a 9-12 high school. The junior school operated from the original Central High School on South Main Street in Pennington. In 1966, the newly regionalized school district authorized the construction of a $2 million Timberlane Junior School on a site adjacent to the new Central High School. The original Central High School, on Pennington’s South Main Street, today houses the district administration offices.

The district’s oldest continually operating elementary schools, Hopewell Elementary and Toll Gate Grammar, date to the 1920s and are well-preserved landmarks in the historic landscape of their communities. Bear Tavern Elementary, which serves students in the Titusville section and western reaches of Hopewell Township, was built in the 1960s, but it is the fourth building to serve students in that area since public education was organized in the Valley.

The district’s fourth elementary school was built and opened in 2002. Stony Brook Elementary School, constructed with a number of environmentally sensitive features, serves students from the Brandon Farms housing development and others living in Hopewell Township’s southern tier.

Pictured above: the historic Woosamonsa Schoolhouse 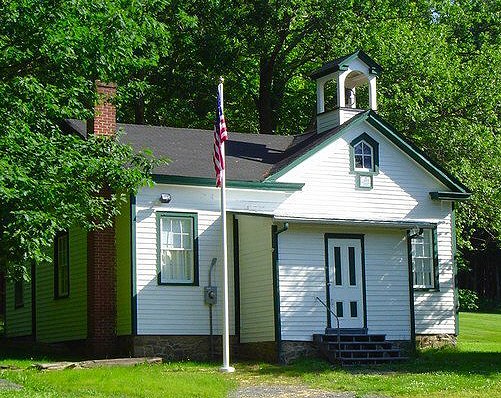